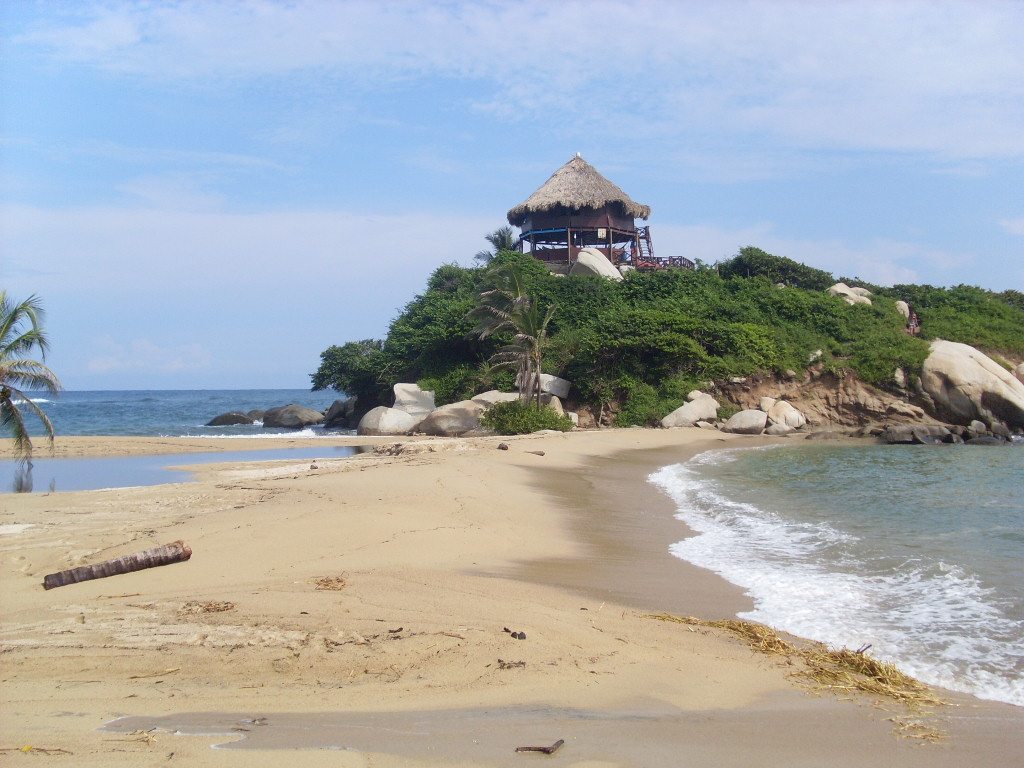 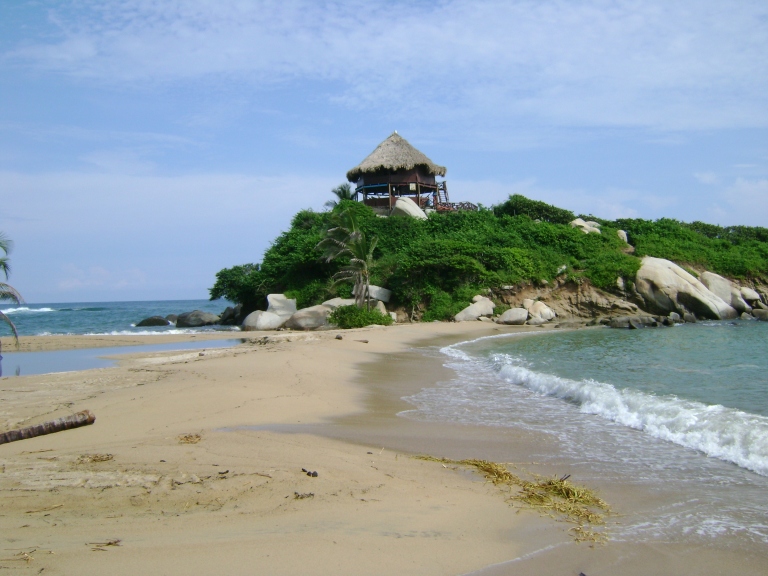 Before there was Angie, there was her suitcase. The emerald green monogrammed monster loomed ominously in the lobby of the Taganga hotel amidst the jumble of battered rucksacks when we came out of breakfast, plied with tropical fruit and zinging on Colombian coffee. We buzzed with speculation. It wasn’t until later that evening that we spotted its diminutive owner, standing at reception gesticulating furiously. We sipped mojitos by the pool, transfixed by her tantrum.

An early start wraps us in a curtain of blinding green as we hike deep into the Tayrona National Park, around 58 square miles of equatorial rainforest bordered by the Caribbean Sea and the Sierra Nevada de Santa Marta, one of the world’s highest coastal mountain ranges. The dense rainforest canopy pulses overhead with titi monkeys, squirrels and over 200 species of birds. I trail behind the others, peering into the gloomy shade trying to spot an elusive jaguar as I fend off a whining surge of bugs. Hiking boots squelch through sticky terracotta mud as we weave between towering palms.

My stomach gurgles with memories of last night’s succulent citrus-spiced fish, then the bitter taste of Angie’s voice. ‘You expect me to eat that?’ she had screeched. “It has eyes!’ As the untouched glittering fish was carried back to the kitchen, it was hard to tell who was pouting more – Angie or the snapper. The glamorous thrill of that fancy luggage had worn off.

I carefully skirt a giant mud pool and almost miss her, camouflaged in brown sludge. Angie slumps to the side like a broken twig amongst the fallen tree trunks. She must have fallen in. ‘I’ve had it with this trip,’ she sulks. A huge iguana scuttles through the foliage behind her, tail disappearing between the roots. I try not to laugh. ‘I hate the food, the hotel, the dirt!’ A colour-splashed macaw flutters through the leaves and for an instant she glances up, wondrous.

Two hours later, aching and filthy, we fight through bracken to be assaulted by blue – turquoise water, a clear cyan sky. Water explodes against immense boulders. There is not a soul or a building in sight. We kick off our mud-heavy hiking boots and let warm waves lick at our sweat. Angie wades in. White froth smacks against her thighs and chases her playfully across the dizzyingly bright sand.

Beach after beach sprinkles the coastline, each more perfect than the last. Shadows spread their web slowly across the jungle and just as the sun teeters on the horizon, we reach El Cabo. An open hut perched on a towering rock on the beach’s promontory welcomes us, offering 360 degree views of the wilderness.

At dinner, when they pass round platters of barbecued fish, peering glassily at us through chargrilled pupils, I brace myself for the inevitable drama. But nothing. I watch in the dim light as Angie shovels mouthful after mouthful of flaky white seabass into her mouth, determinedly not meeting its gaze.

Tucked into our hammocks high above the rhythmic smash, we swing ourselves to sleep surrounded by stars. Tomorrow, we would trek for four hours deep within the jungle to discover the 250 stone terraces of Chairama, a settlement abandoned by the pre-Columbian Tayrona tribe back in the 17th century. The area is still inhabited by their descendants, the Kogui tribe.

Angie had arranged to take a boat back to town first thing in the morning. When the raucous bird cries squawk us awake, her hammock is empty. Surprisingly disappointed, I silently gather my things and make my way down to breakfast.

There, sitting on the pale sand sipping coffee from a paper cup is Angie, face swollen with mosquito bites and designer shorts crumpled. In the glimmering distance, a monster wave rears its head, but she’s lost in thought. She spots me and smiles, raising her hand to wave when it slams her under. She squeals as her coffee cup goes flying. As the water retreats, Angie crawls to her feet, slick as a seal with mucus pouring from her nose. But, for the first time, she’s laughing.

– Surfers rejoice, swimmers beware – the currents and waves here are lethal. Find out which spots are safe for swimming.

– Troubled territory – the area used to be the stomping ground of guerrilla group FARC but a government crackdown has rendered the region mostly safe.

– Dodge seedy Santa Marta – use unspoilt finishing village Taganga as your jumping off point instead.

– Be prepared – bug spray, sunscreen and a hearty pair of hiking boots will be your best friends in the jungle.