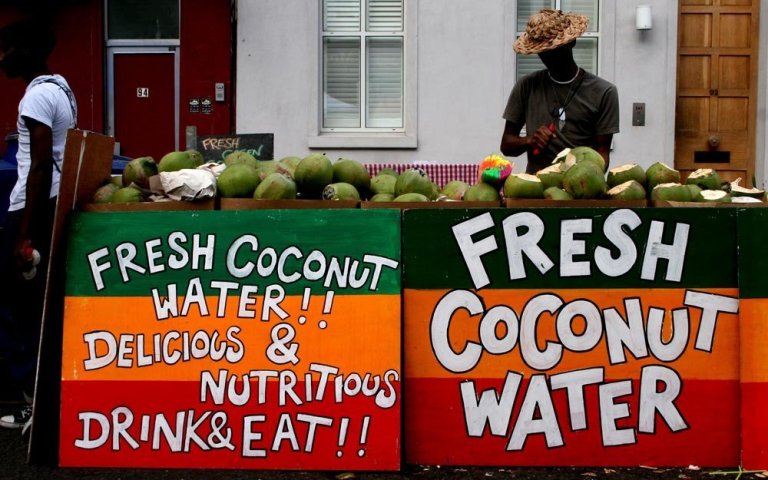 I’m sniffing around for a whiff of jerk chicken – that charred peppery tang that usually fills the West London air over the August bank holiday weekend.

On the Sunday and Monday of that summery long weekend, food stalls pack themselves along the jumbling mesh of Notting Hill’s streets, swarming with over a million revellers and 40,000 volunteers.

Feathered floats studded in sequins crawl down the street, disrupting the tightly packed grey of the drab council estates and cream of the stucco terraces with a spray of colour.

Down the alleyways, the urge to dance is infectious as 40 sound systems radiate a mish mash of soca, calypso, reggae, ragga, hip hop and London-born hybrid beats.

It’s the largest festival of its kind in Europe, a little slice of the Caribbean in the middle of London’s frantic urban sprawl.

But at the moment, it’s the Caribbean taste I’m after and it’s proving strangely elusive.

To the right, among the stalls clustered around the street corner, my nose picks up the peanut richness of Senegalese chicken stew bursting from a bubbling copper pot. Over to the left, the chargrilled lemon-tinged scent of Indian lamb kebabs almost reels me in.

No longer just a West Indian celebration, Carnival has grown to envelop all of London’s myriad cultures, merging them into one vibrant hub.

Somehow, I manage to stay strong in the face of temptation. That plate of steaming goat curry, the mountain of rice and peas, the plump dumplings and sticky plantain has become an annual Carnival tradition for me.

So I keep moving, carried by the frantic drumming and steel pans through the pulsing pandemonium of West London.

The crowd jumps in among the floats, picking one to follow through the jam-packed streets, kids riding high atop broad shoulders as onlookers swig cans of Red Stripe from the sidelines.

But it’s not until I’m approaching Kensal Rise station as the crowds are starting to disperse that I finally catch the smoky smell.

“Jerrrrrrrk chicken,” comes the cry, but before he’s even done calling out the words, I’m standing at the counter of Reggie’s Shackgreedily eyeing up the buttered cobs of corn and meat-lined barbeque grills.

“It’s taken me all day to track down some jerk chicken,” I explain.

“Whaaaaaaaaaat? This is Carnival!” he laughs. “The place is crawling with jerk chicken!”

Reggie gestures down the street and I see that, sure enough, the pavements seem suddenly lined with grills expertly charring marinaded chicken pieces.

As the twilight chill creeps into the air, I gnaw on greasy chicken thighs, juicy with pepper, running through my fingers and fleshy fibres sticking in between my teeth.

Squatted down on the edge of the curb as bedraggled and weary partygoers kick up flyers and paper napkins in their wake, I suck my fingers clean.

I’m hauling myself to my feet, several pounds heavier, to join the flow of the homeward bound when I feel a package thrust into my hands.

“Take the rest of the chicken, crazy girl,” Reggie says with a wink. “We’re shutting up shop.”

I’m stuffed to the point of indigestion, but I take it from him gratefully, certain that I’ll find space for it on my train journey home.

Thank heavens Carnival only comes once a year.