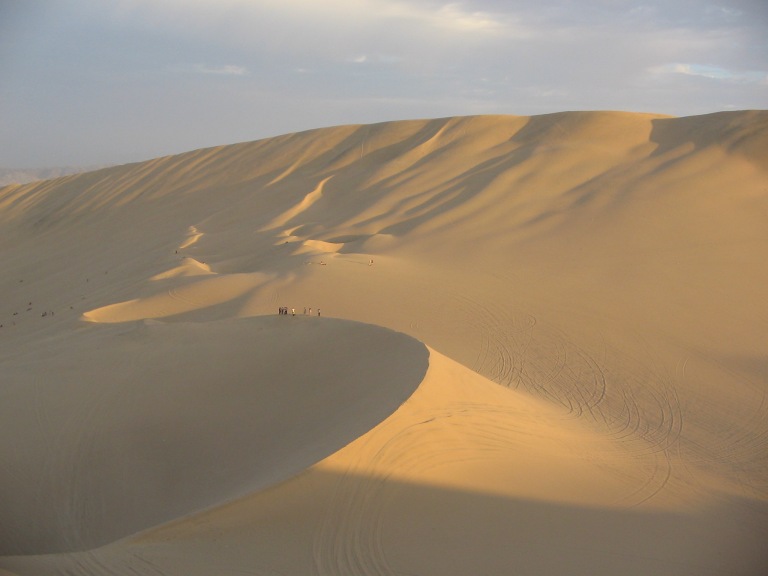 He makes it look so easy. Skimming effortlessly down the steep wall of sand on his board, our guide stops with expert precision and grins up at us, with both thumbs pointing upwards. Feeling encouraged, I tip myself over the edge. But the feeling of elation coming to an abrupt end as I slam face-first into the sand.

Around me the desert rises and falls, dunes disappearing haphazardly into the cloudless blue sky. In the distance a dune buggy sputters towards the desert oasis’ glimmering palm-fringed pool. Sand sprinkles from my eyelashes. I blink – this is Peru?

In 1911, high among the clouds in Peru’s Andes, American anthropologist Hiram Bingham discovered the forgotten Inca citadel of Machu Picchu. More than 100 years on, the world remains in awe. But the obsession with the spectacular fortress has often seen Peru’s other charms overlooked.

Determined not to miss out, I find myself here at the Huacachina oasis in Peru’s Ica region, around 200 km south of Lima in the depths of the desert — not an Andean mountain in sight.

The next day, I fly over the site of one of Peru’s greatest mysteries, the Nazca Lines — a series of lines forming shapes cut into the gravelly desert floor. They spread over an area of 500 square kilometres with some of the figures stretching to 200 metres across.

“I’m going to spew” screams the American teenager in front of me, her auburn curls flying wildly around her head as the tiny propeller plane swings a sharp 90 degrees to the right through the crisp early morning sky. We gawp out of the window at the mysterious desert squiggles in the shape of a monkey before the compact plane lurches to the left to reveal a snake. Our cameras click frantically.

Nobody knows how the lines got there — speculation ranges from aliens to Nazca people of the early part of the first millennium.

In need of a stomach-settling drink, we leave the green-gilled American in the airport’s shade clutching a paper bag and head for nearby Pisco. This town is one of many that claim to be the birthplace of the national drink — a good enough excuse to order a pisco sour (a mixture of grape brandy with egg whites and angostura bitters).

But drink drained, there remains little to do in this small town.

So I order another.