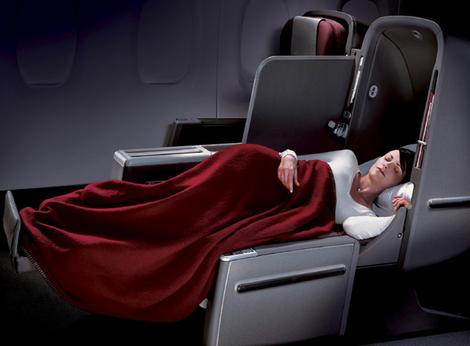 For me, travelling in business class means three things – some top notch nosh, free flowing wine and a chance to catch up on some z’s. Movies and massages are added benefits, but it’s really these three things that make it so exciting to get that upgrade stamp on my boarding pass.

Prone to restless nights, I do some of my best sleeping on board airplanes. Without the distractions of the world below, it’s somehow ok to just lie there like a slug for 10 hours, 15 hours, however many hours. How often are we afforded that luxury?

Over in economy, the lack of space, someone pushing past you to go to the loo every hour on the hour, or even an unwelcome attempt at conversation from your neighbour can disrupt plans for some shut-eye. But those things aren’t an issue in business class – or at least they shouldn’t be…

But sometimes things go wrong – even in business class.

At first, it seems like a great idea – wifi on board! I can check my emails, finish off some work, even send a couple of Facebook messages to a few friends. Tap, tap, tap. But the novelty soon wears off – there’s wine to be drunk, food to be devoured, movies to enjoy and of course sleep to be caught up on.

So, my computer is soon stowed safely away and I’m lying horizontal beneath the stylish monochrome stripes of my Etihad doona – no mattress here, but the soft beige leather of the seats is pretty comfy so I’m soon in the land of nod.

But my high hopes of snoozing all the way to touch down are dashed just a few short hours later. Maybe my REM cycle is to blame for the timing, but it sure isn’t to blame for my failure to get sink back into slumber. The plane is darkened, and pretty much everyone else is snoozing. So why can’t I get back to sleep?

Across the aisle from me, a wide-eyed lady is heavily involved in an excruciatingly loud Skype call with her entire family in some ground level part of the world. The bright light emanating from her smartphone screen beams into my line of vision as I listen to each comedic moment of the call, unable to understand what is being said apart from the hint that the hysterical laughter means its pretty funny stuff. Ten minutes later, its still a riot. And another ten minutes after that, I’m fairly sure that whatever is being said couldn’t get more hilarious.

For me, my time in the sky provides an escape from the minute to minute connectivity of modern life. But others don’t long for that release in the same way. They want to stay connected wherever they are – even thousands of metres up in the air. Which is fair enough, but surely there must be some better way to provide the option to connect in a setting where it doesn’t disrupt everyone else?

A notice urges customers to ensure their phones are on silent in order to be considerate of other passengers. But it’s not the ringtone that’s the problem.

Ditch the wifi, I say. We survived without it once, surely we can last a few hours without it in the sky. And then, maybe, we can get some kip!

2. A scuttling stowaway – Emirates flight from Sydney to Dubai, 14 hours

It’s not often that I get to fly business class so I’m really enjoying a glass of chilled Moet & Chandon in my oh-so-spacious seat – 26G – aboard the Emirates Airbus A380. I flick the massage function on, and am just getting used to its strange mechanical undulation when I spot something black and swift from the corner of my eye.

I lock on it, pupils widening in horror as I register that the scuttling black shape is, in fact, a cockroach, and a bloody big one at that.

Does that mean it is still under there? Or has it zigzagged off to some other part of the plane? Maybe even the kitchen?

Perhaps I imagined it, or maybe it’s the champagne? Unlikely, I think – I’m only on my first glass and I’m not that much of a lightweight.

Normally the first thing I would do on a flight would be kick my shoes off, but this time I can’t bring myself to give them a tug. Instead of settling down on the comfy mattress for a massive snooze as usual, I defy my droopy eyelids, keeping myself engrossed in movie after movie so I can’t fall asleep.

What if that crunchy little creature clambers out from beneath my seat while I slumber? What if it finds its way between the buttons of my top, among my unbrushed locks, or even worse, tumbles through my parted lips as I gently snore and lands in my mouth?

Sleep deprived, my mind goes into overdrive. How many times have I been surrounded by these little critters while contentedly sleeping? It’s the first time I’ve ever spotted one on a plane, but that doesn’t mean they haven’t been crawling all over me on every other flight I have ever been on.

Just how many roaches are there up in the sky? And what else is hiding up here in these airborne nooks and crannies?

Just earlier this year, a poor python was carried up, up and away – well out of its comfort zone – and smacked time and time again against the side of a plane as it hung on for dear life. Outside the plane, yes, but how hard would it have been for him to slither inside before take-off. And with cockroaches and snakes on board, why draw the line at spiders?

By now, I am coiled into my chair, feet well clear of the floor and a blanket wrapped around me like a suit of armour as I fret and flap.

Maybe another glass of champers will calm me down. Sure enough, it does. And the one after that does an even better job. Maybe one more will deliver me into slumber.

I’ve forgotten about that roach, and even if I swallow one in my sleep, I no longer care. Thank goodness for free flowing champagne.

3. Baby on board – Finnair flight from Singapore to Helsinki, 12 hours

Admittedly, it wasn’t our first choice, but we’re taking the “reindeer” route from Sydney to London.

That doesn’t mean we’re going to get snapped with Rudolph, simply that instead of the one stop, we have two – in Singapore and Helsinki.

Fresh from getting hitched just three hours earlier, we spend the first leg of the journey, aboard a Qantas A330, guzzling champagne. So be the time we board our flight bound for Helsinki, we are seriously in need of sleep.

While the seats on this older plane aren’t lie-flat, reclining only to around a slight angle, and a little hard – they’ll do. But as we bed ourselves down under the blue fleecy blankets, a baby in the seat across the aisle begins to scream. And scream it does for the next 12 hours.

I feel sorry for the little tyke and even worse for his mother who spends the entire journey trying to calm him. But, selfishly, I need to sleep! That is, after all, why we paid the (substantial) extra to fly business – we need to hit the ground running when we arrive in the UK for a whirlwind round-trip of our combined families.

Rummaging in the flight packs I find a set of earplugs and slot them in. Then I grab the leather padded headphones which I pray are noise cancelling and pop them over.

It’s not perfect, but it’ll do. Just for good measure, I quickly chew down my underwhelming meal of penne pasta with tomato sauce and cheese accompanied by another slug of champagne hoping the carb-alcohol combo will imitate the effect of a sleeping pill. And it works.

Just last week, budget carrier Scoot introduced child-free cabins aboard its flights. It follows similar moves by AirAsia X and Malaysia Airlines which were met with mixed reactions – indignation from some and relief from others. But I’m all for it.

Wouldn’t it make sense for a similar policy to be carried over to other airlines in both the economy and business cabins? Families can continue to travel as usual, and people willing to pay for the “quiet zones” then that’s their choice – and airlines have found another clever source of revenue.