It’s been a while since I last stayed at the Fairmont Resort near Leura in the Blue Mountains, and boy has it changed.

That’s a good thing because it was definitely in need of a little love back in 2011, when we last visited.

That was just after it had been bought by Dr Jerry Schwartz for $24 million and had joined the Accor portfolio as an MGallery property.

The sale marked the start of a major overhaul of the property which had become pretty neglected under its previous owners.

Since he snapped it up, Schwartz estimates he has spent a further $24 million on improvements, with guest rooms and public areas all benefitting.

The decor is definitely still on the quirky side and somewhat dated in parts, but somehow that gives the hotel character which is so rare these days.

So while it might not be top of my mind for a luxurious romantic break in the mountains, that was definitely not the purpose of this stay.

With kids in tow, we were here to visit Dinosaur Valley at Scenic World in nearby Katoomba.

Read all about our visit to Dinosaur Valley here.

And for this purpose, the hotel was an absolute winner.

The quirky little details like the aquarium in the lobby, the fairground organ and the model train set had my little boy enthralled from the word go.

Add in the pony rides, train and a heated indoor swimming pool complete with lizard mural,  and he was in seventh heaven. 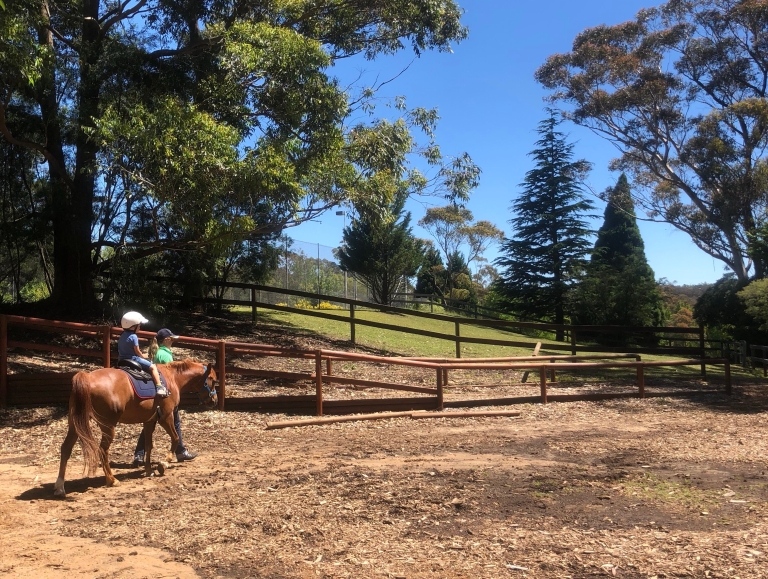 And the tiny kids aren’t left out of the fun either. They have a dedicated play room as well, with rockers, smaller sides and a cute mini ball pit.

Not to mention a cinema with several screenings a day of movies that are firm favourites with the little people.

In terms of dining, kids options are available in the Embers Restaurant. We’re talking the usual suspects – spaghetti bolognaise, pizza, fish and chips.

The restaurant has a more exciting menu for grown ups too plus the added benefit of mesmerising views across the mountains and a fireplace for those winter months.

I was particularly impressed by the “well-being menu” which was much tastier than I expected. I tried a few of the more indulgent menu items too, but my favourites were definitely the healthier options.

I tucked into the poached chicken with bok choy and pickled cabbage (just 180 calories).

I followed that up with a coconut panna cotta with berry compote and yoghurt ice cream (just 109 calories!).

The hotel’s commitment to wellness is also seen in its gym and swim facilities, daily yoga classes and brand new Ubika day spa.

That doesn’t mark the end of the renovations either.

While we were there, construction was underway on a new ice rink. So, we’ll definitely be back to check that out when it’s finished.

Have you ever stayed at this hotel?